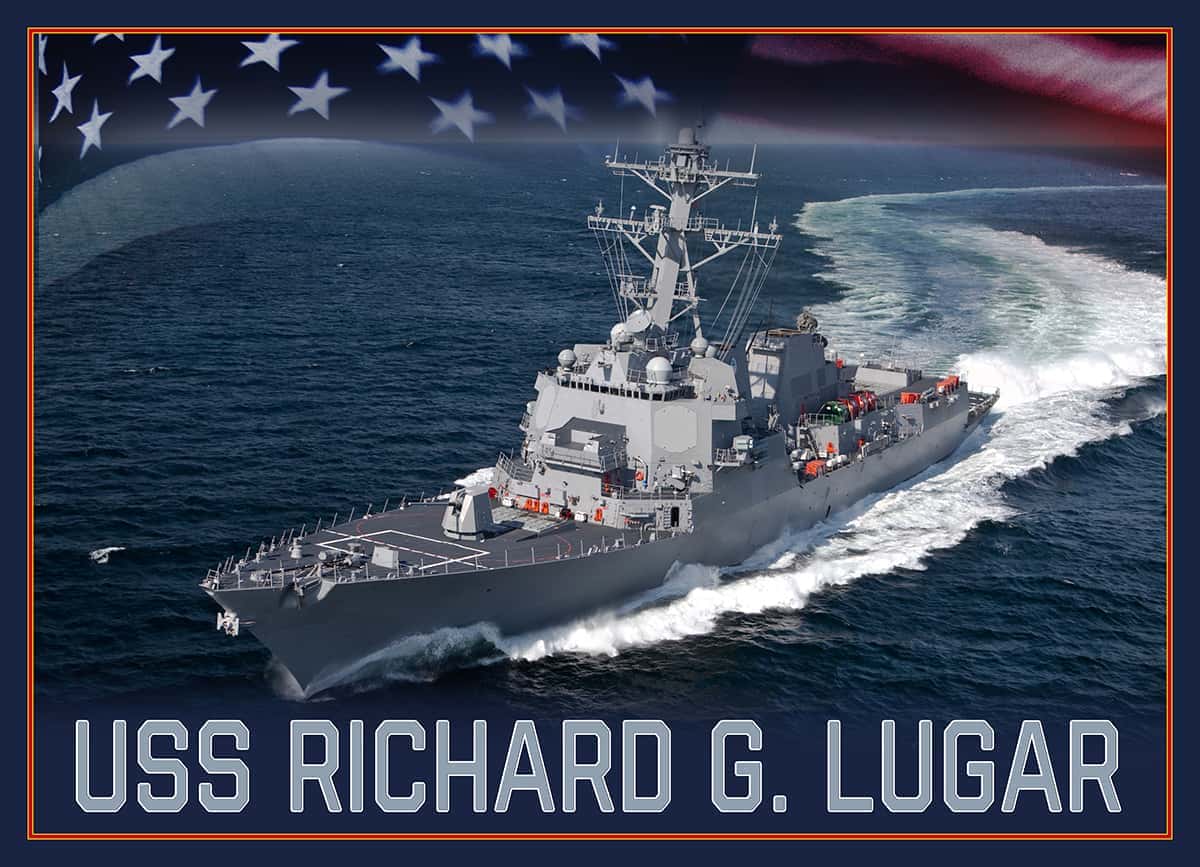 INDIANAPOLIS–A warship will be named after former Sen. Richard G. Lugar, who served as mayor of Indianapolis, a United States senator from Indiana, but before his political career, as a lieutenant in the Navy. A naming ceremony for the ship, which has not yet been built, was held Monday, inside the Shrine Room, which is the middle of the Indiana War Memorial.

“It’s wonderful. It’s a great honor and Dick served as the briefer to Admiral Burke when he was in the Navy, so it’s even more special,” said Charlene Lugar, Sen. Lugar’s widow. She will serve as the sponsor of the ship, which will be an Arleigh Burke Class destroyer.

Burke served as Chief of Naval Operations during the Eisenhower and Kennedy administrations.

“We loved our Navy time and are so proud that they chose to honor him. I don’t know how long it takes to build a ship, but I hope I’m still here to see it commissioned,” said Mrs. Lugar.

Sec. of the Navy Richard Spencer, said it could take as long as four years for the ships keel to be laid (within the year), for the ship to actually be built (another two years), for the christening, sea trials (another 14 months) and finally the commissioning.

“When you consider the naming of a ship, you realize what the ship does. It forwards the presence of the United States of America. And, when you consider what Dick Lugar and (Sen.) Sam Nunn did, it’s a no brainer to name the ship after him.”

Spencer and Sen. Todd Young spoke during the ceremony about Lugar’s involvement in making certain Cold War armaments in Russia were destroyed. Young and Sen. Mike Braun are credited for the legislation that will allow the ship to be named after Lugar.

“Ships are designed to deter war instead of make war. That’s their first mission,” said Young. “Sen. Lugar was a peacemaker. This is a peace-making ship,” said Young, who said Lugar was a mentor to him. Young said he believes the tribute is not only fitting to the memory of the senator, but to honor his family.

Mrs. Lugar said she believes her husband remained a man at the top of his craft, even after he left elected office.

“He just loved what he was doing. He was very good right up to the end,” she said. “He had been giving speeches in Ohio over the weekend, came home on Sunday. On Monday he developed this wracking cough. On Tuesday he was in the hospital and there was nothing that could be done.”

“For him I’m happy that he didn’t suffer. He was pretty sharp up until the end,” she recounted. “We were married 64 years. That’s a long time. And, it was happy.”

The destroyer will one day, too be decommissioned, said Young, But the legacy of Lugar, someone who had an impact not only on Indiana, but the world, will live on.