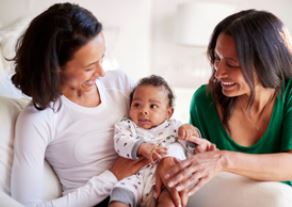 Governor Holcomb signed the “O-B navigator” bill in May. Since then, the health department has been lining up local partners and figuring out how to connect low-income women with the service, which walks them through the prenatal care they need and the first year or so after delivery.

The goal is to bring down Indiana’s chronically high infant death rate, the seventh-worst in the nation. A baby born in Indiana is 26-percent more likely than the national average to die before her first birthday.

Indiana health commissioner Kris Box says there are several contributing factor in Indiana’s 600 or so infant deaths a year, from abuse and neglect to sudden infant death syndrome, but the most significant by far is a lack of early prenatal care, a factor in nearly half of those infant deaths. The health department has a hotline women can call for guidance in finding pregnancyservices, but Box says low-income women are often too busy nailing down food and shelter to seek out prenatal care.

The navigator program seeks to take the initiative to bring those services to them. The department plans to use Medicaid and emergency-room data to identify pregnant low-income women and have the hotline contact them. The navigator service will work with nursing partnerships and other local health groups to, in Box’s words, “wrap their arms around” pregnant women, getting them the care they need and shepherding them through their first year of motherhood.

13 zip codes in Indy and six other cities account for one-eighth of Indiana’s infant deaths. The navigator program will work with Medicaid enrollees in those counties, plus 14 more with the highest rates for risk factors like smoking and premature births.

Indiana’s set a goal of improving its death rate to best in the Midwest in five years. That would represent 200 fewer deaths a year, a one-third improvement, and would lift the mortality rate to 12th-best in the nation.